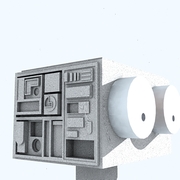 activate a global surveilance system that gives live video feeds of all movement outside of private houses can create a turning point in awareness, equal to an upgraded skill of viewing.Universal acess and acess to the stored data, for all participants can create a new form of savety, as well as create a system that allows self surveilance of the hole human species itself.

Next would be redistibution of value....long enough people did work for the sake of work itself.To make sure that housing, food and acess is available in acceptable manner a global income can be established, this create a turningpoint in focus of humans, so that they can start to work for their passion, and destroy the value of status, as it exsists today.

Both together can then finally create the critical mass needed to redsign the actions of humans as a species itself.

Most promising would this wave of healing be for science, medicine, and the exsistance of the last remaining species that nature has to offer.

Its just a shame that there is no discussion to redesign the system we life ib, even though the planet is going down...especially when we have a small elite of global descison makers, what can force them to come together and stop humans from what they are doing...and free us all from competition against each other for the sake of power over others or money.

technology is far ahead of what is available for the masses....a subject to change..patents and secrecy and lies can be eliminated if there is no other goals for humans left then wellbeing.

What is it good for to tell again and again that we can have sustainability and enviromental friendly living if that facts that earth doesnt technically need to suffer if humans combine their effords for their basic needs and go from that point are never subject of discussion on a larger plattform like tv and global politics.

what would be the best acess point to once and for all prove that we could establish a mostly conflict free living together with not much dutys?

I really wonder ...the technology to mass communicate are exsisting, environmental friendly technology that is exsisting too, we could have transport systems way ahead of cars and busses..things like solar upwind and sun, water and windenergy suficient for all needs, universal acess to the descisions that effect us directly and way more...but there is nothing changing.

Democracy itself is a joke when its about to find the best working solution and not something temporarily popular, and the answers .... the p2p foundation is already full of good answers ..the net is full of good thoughts..why is there no links upwards to challenge the leaders to make a united world and fix the root problems not do politics inside the system that prvents so much.

There is way enough work force and ressource if its not wasted in competing against each other.

This world is a shame and it makes me sick and that even for real when my mind flips over from time to time to see time go by nature go down and people suffer on all levels.